I can’t promise that the episode will be done by next week, But since its been a while since the last post, I thought I’d give whatever update I can. So, here it is.

The evening twilight casts an eerie calm through the partially clouded sky, into the heart of the dense jungle.

The calm is broken as a blue streak cuts a path between the trees at high speed. Sonic the Hedgehog pants heavily as the forest rushes by him. He glances back over his shoulder as he runs. Seeing nothing, he wipes the sweat from his brow, and keeps on running. But something catches his eye. To his right, intermittently hidden by the trees rushing by, another figure rushes through the shadows, keeping perfect pace with Sonic. The trees momentarily clear, long enough to reveal the figure of Shadow the Hedgehog, his eyes locked firmly on Sonic.

“Shoot!” Trying to lose the pursuer, Sonic picks up the pace.

With a growl, Shadow speeds up to match.

As Sonic moves faster, it becomes clear that Shadow can’t quite keep up. Up ahead in the distance, a faint, shimmering, rainbow-colored light comes into view. “Come on, come on,” Sonic mutters to himself. “Just a little bit farther…”

In a flash of blue, Shadow suddenly appears in his path.

“Whoa! How did he–!?” Acting fast, Sonic leaps from the ground, flipping through the air to collide feet-first with a wide tree trunk, and kicks back off, shooting in a new direction that takes him away from Shadow. He lands on the ground and keeps on running.

Sonic looks off to his right, where his target, the glowing light, now waits. Not allowing himself to get too far from it, Sonic makes another leap, intending to get back on course. But this time, Shadow appears in the air directly above him, striking down with a hard kick that knocks Sonic straight to the ground.

Shadow steps slowly up to Sonic’s fallen form. “Finally…I’ve got you right where I want you.”

What’s this!? Shadow attacking Sonic!? Just what kind of episode is this!? Find out next time, on The Chaos Project 50th Episode Special!

Well, at this point, listing the exact changes made from the original Shadow the Hedgehog would be a bit…arbitrary. It was…all change. Sure there were some old quotes used under new contexts, and of course Gerald’s message still played, but that’s about the extent of the similarities.

I suppose, right now, the most important thing I ought to talk about is the reason this story exists in the first place, now that the surprise twist is out there in the open. Sonic Boom. Why? Well, anyone who’s watched the full show might have been a little bit confused by one element of the epilogue. Shadow’s castle. You might be thinking, “Didn’t Shadow live in a cave or something?” The cave was just a clever hiding spot he chose for the Eggmen during his plot to destroy the universe in “Eggman the Video Game,” the series finale (and a pretty dang good finale it was). Other than that finale, Shadow’s only appearance in the show was the finale of the previous season, “It Takes a Village to Defeat a Hedgehog,” which you’ve just read a partial novelization of. So throughout the show, no actual indications were given as to where or how he lives. So then you might be wondering, “Where did the castle come from?” Well, personally, I’ll have to admit that I’ve only had the…”pleasure” of playing Sonic Boom: Rise of Lyric. Even though I’ve come to the understanding that the two handheld installments are superior in more ways than one, not the least of which is that they’re actually canon to the show while Rise of Lyric isn’t, I’ve never actually played either of them. But a few years back, not long after the launch of Fire and Ice, something was brought to my attention. Please, take a look for yourself. 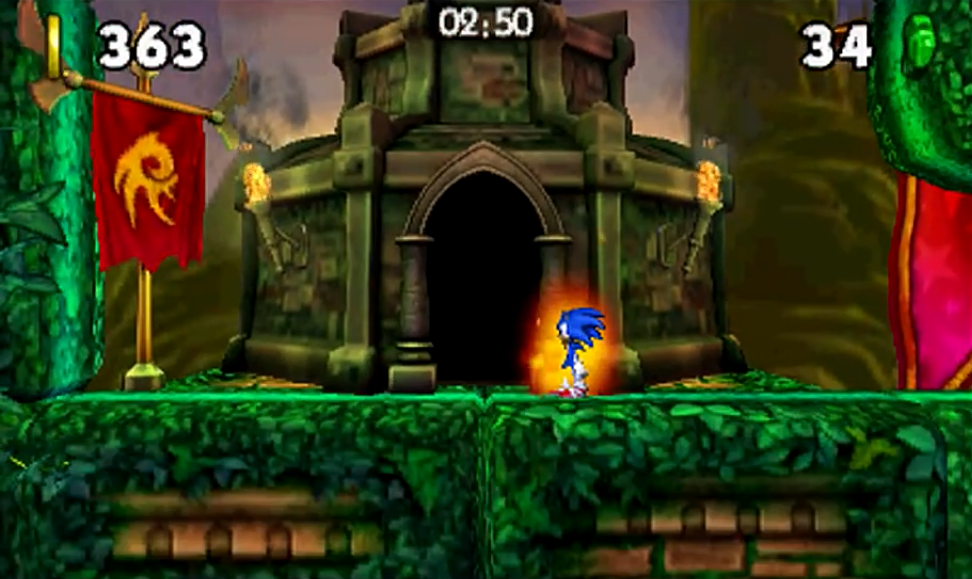 See that symbol on the left? Look familiar? Here let me show you something else. In the Shadow of Time Cover Art

To my knowledge, Shadow the Hedgehog doesn’t even appear in Fire and Ice. But his presence is unmistakable. The top image shown above depicts the “Gothic Gardens” zone of that game. And that banner, bearing Shadow’s personal insignia hung upside-down, is not just hidden in some obscure place as some sort of cheeky reference. No. It’s plastered in plain sight over and over again throughout the level. If you’ve seen it before, it’s practically impossible to miss. That kind of thing doesn’t happen on accident. So the moment I first saw it, it got the wheels turning. In-universe, why could that possibly be there?

That emblem has appeared only one time. In the heart of the Black Comet. At first, I contemplated the possibility that Sonic Boom was actually a post-apocalyptic world where the Black Arms had taken over all but a few isolated pockets of the world.  But you gotta figure you’d see more evidence than this if that were true. So then, the Black Arms must have been defeated. But then, what would these banners be doing here? They obviously weren’t made by the aliens themselves, it’s not in their typical organic style. They would have to have been put up by someone, someone who knew what they meant, as if in the aliens’ honor. Perhaps, someone who is evil in this universe when they normally wouldn’t be, with an inherent connection to them already there. From there on out, the story practically wrote itself, explaining each and every difference between the main timeline and Boom, and how it could all be drawn back to the war with the Black Arms. In the Shadow of Time was born.

So…what else is there to say? Everything, and I mean everything about this story was built to achieve this eventual goal. It wasn’t originally planned as an April Fools joke, I very much meant it all seriously. If you want to believe this story, then you should never look at Boom the same way again. I only really started writing this story because I wanted a distraction to get past my writer’s block on The Chaos Project, and once that was done and I was back on track, this story fell by the wayside. April Fools was just a fun excuse to tie up loose ends.

So, what’s next? Any more spinoff stories on the horizon? Well…maybe. You could say that there’s…a sort of test run coming up soon. If you’ve looked very, very close around at the sight (which I’m sure no one has) you may have seen a hint I dropped for what’s coming soon on the Chaos Project. But actually, I hereby announce, there’s something else coming before that. I haven’t been touting it very much, but the next episode of The Chaos Project will be our 50th! That’s right! The big five-oh! So, I’m already writing a very special 50th Episode Celebration, where you might just be seeing that test run I mentioned earlier…

-Until then, remember to live and learn every day!

This is no April Fools joke. Two full years after I began writing, the final chapter of Shadow of Time is finally available to read, right here! (Plus a bonus Epilogue!)

“You probably think…that I’ve become the greatest evil you’ve ever faced…don’t you?” The time for the final battle has come. A hero’s name is in ruin. It’s every Hedgehog for himself, Devil Doom take the hindmost. Everything must end in one great Boom.

– (Okay, maybe it’s a little bit of an April Fools joke. But you’ll have to read to find out!)

Follow The Chaos Project: Sonic the Hedgehog on WordPress.com